Mitch McConnell is a PIECE of SHIT !

This is a PIECE of SHIT !!!
Mitch McConeell 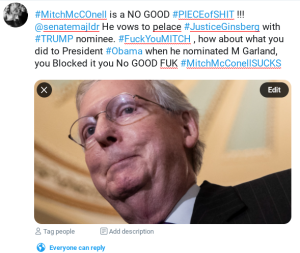 #MitchMcCOnell is a NO GOOD #PIECEofSHIT !!! @senatemajldr He vows to pelace #JusticeGinsberg with #TRUMP nominee. #FuckYouMITCH , how about what you did to President #Obama when he nominated M Garland, you Blocked it you No GOOD FUK #MitchMcConellSUCKS @realDonaldTrump

President Barack Obama quickly named Merrick Garland, then 63, to fill the seat. Garland had long been considered a prime prospect for the high court, serving as chief judge on the U.S. Court of Appeals for the District of Columbia Circuit — a frequent source of justices that is sometimes called the "little Supreme Court."

Widely regarded as a moderate, Garland had been praised in the past by many Republicans, including influential senators such as Orrin Hatch of Utah.

But even before Obama had named Garland, and in fact only hours after Scalia's death was announced, Senate Majority Leader Mitch McConnell declared any appointment by the sitting president to be null and void. He said the next Supreme Court justice should be chosen by the next president — to be elected later that year. In a speech that August in Kentucky, McConnell would say: "One of my proudest moments was when I looked Barack Obama in the eye and I said, 'Mr. President, you will not fill the Supreme Court vacancy.' "

A PIECE of SHIT ! 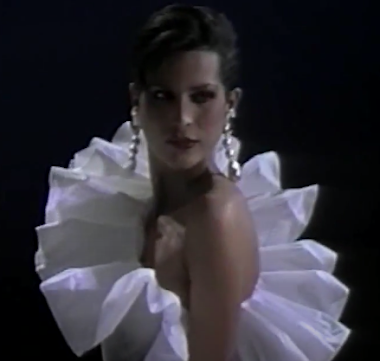