4 Dumplings for a DOLLAR No More

A little bit of Serendipity on the Lower East Side of Manhattan yesterday. I needed to buy a few items down on Eldridge Street yesterday. This wasn't my only reason for jumping on the F Train at West 4th Street near my apartment. No I usually try to couple things together, and my reason for picking that particular store I was going to, was that it was just a block away from favorite Dollar Dumpling Joint, "Prosperity Dumpling" on Eldridge, 2 blocks North of Canal Street.

I hadn't been down there in a few months and I was jsut dying for some of those tasty Dumplings, and especially at just a Buck a Pop per order. Without a doubt, thee Greatest Food Value per for your money in the whole of New York City, hell, maybe even the country. And I've been extolling these virtues for several years now, and was the first to report on Prosperity on Eldrige while everyone else was just riding the #1 Dumpling - Vanessa Dumpling Band-Wagon.
I discovered Prosperity Dumpling one early evening about 3 1/2 years ago after strolling around a bit after my haircut from the Chinese ladies on Eldridge. It was Love at First Bite, and has been Luv ever since.
So last night I hop on the F Train. At first I was planning on getting off at the East Broadway stop, but at Delancy & Essex I jump off the train there. Figured I'd take a little extra walk and exploration before heading over to Prosperity, but then I was walking on Clinton, checking things out, and what do I stumble upon? Prosperity Dumpling! Wow, I couldn't believe it. They opened a branch on Clinton Street. Awesome.
Well, I continued walking around a bit. Exploring. Then decided to have my Dumplings at the new joint instead of the original down on Eldridge. I ordered a order. Just one order, I figured i walk down to the store, then have another order down on Eldridge. Got them. They were Yummy of course, and I needed more. I order wasn't enough, so ordered 4 more.
They hit the spot, and the second order did the trick. I had my fill, and just for Two Bucks. Yes $2.00 for two orders of tasty home-made Pork Dumplings. You can't beat that with a stick.
Just one problem. People at Prosperity Dumpling, when are you gonna open a shop in the West Village, somewhere near Houston and McDougal Streets? Please? We need One! 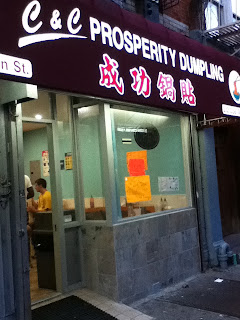 PROSPERITY DUMPLING
4 FOR A DOLLAR 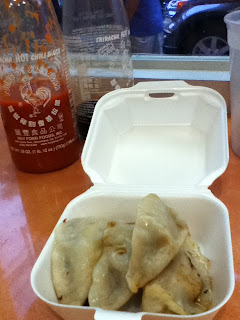 A THING of BEAUTY

Email ThisBlogThis!Share to TwitterShare to FacebookShare to Pinterest
Labels: 4 DUMPLINGS for a DOLLAR is no more