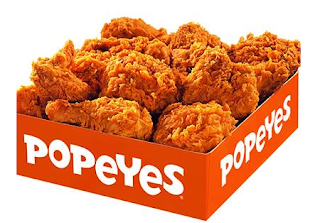 Popeyes Fried Chicken
"Just So-So"
I used to Love Popeyes Fried Chicken. I think it was much better, back in the day, more than 20 years ago when I first started eating it. Now? "It's jus So-So," not that good. It's actually pracically tasteless, you hardly taste antyhing. The fried chicken at Popeye's is seriously underseasoned, with almost no seasoning at all, not enough salt and not enough pepper, and it seems as though there are not herbs or spices to season the chicken at all, unlike the great taste of KFC Kentuck Fried Chicken and their Secret Recipe of 11 Herbs and Spices (Paprika, Onion Salt, Celery Salt, Dry Sage, ground Allspice, ground Oregano, Chili Powder, Black Pepper, dty Basil and Marjoram).
I must say that the most prominent flavor I tasted with the Popeyes Fried Chicken was "Not the Chicken" but the frying oil, and that's not a good flavor to have at the forefront of anything you eat, espcially Fried Chicken. What a disappointment when I went to the newly opened Popeye's on
6th Avenue in Greenwich Viallage. I was hoping for the best. Number one, as I looked at the menu, it occured to me that in less than 8 years the priced of Popeye's Fried Chicken has doubled to triple in price, compared to what it was not many years ago. Less than 8 years ago, I used to be able to get a special of 2 pieces of Fried Chicken, a Biscuit, and Canjun Fries for just $3.49 ... Now? "Forget about it." I used to be able to get 8 peices of Fried Chicken for $10.99, a pretty good deal. Now those same 8 peices of Fried Chicken at a Popeye's in New York City cost more than twice that much at $28. 49 I saw at the Popeye's on Sixth Avenue today. "A rip-off for a fast-food joint." And it's not even tasty. In  fact it's almost devoid of taste at all, other than tasting the frying oil, which totally dominates all other flavors of the chiken at Poepye's. "So disappointing. I want it to be good. Not!"
Lucky for Popeye's they came out with that tasty Fried Chicken Sandwich a couple years ago. It's really pretty good, but I'm worred if the quality might have gone down since the last time I had one over a year ago at the, then Popeye's on 14th Street (now closed down). The Chicken Sandwich was a bargain at $3.99 each, but sure enough when I was at the Popeye's on SixtH Ave earlier today, I noticed that it has gone up to $4.99, whcih I was actually expecting that it would go up in price. No problem if when I go in next week to try the Popeye's Fried Chicken Sandwich at this new Popeye's on 6th Avenue in Greenwich Village, NYC. If it taste good, I won't mind it going up a dollar. But if it's not good? That won't be good for Popeye's or me going there that much. "We'll see."
And as for the Biscuits, which I always loved, these, like the chicken were not up to snuff. Not that good. A but dry I'd say. And not as tasty as before. Anyway, I wish Popeye's the best, and I hope they improve. Again, "we'll see." 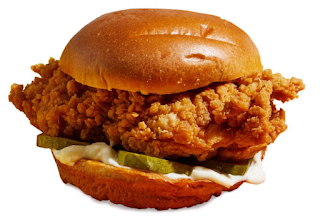 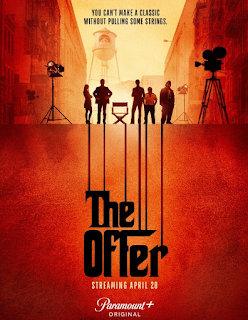