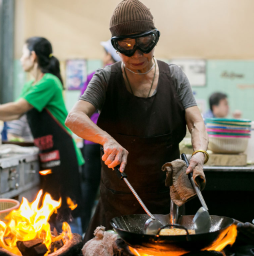 Bangkok is legendary for its fun and its food. Especially its street food. And one vendor's is so good, it has earned a Michelin star for the second year running. Raan Jay Fai is a small, seven-table joint in Old Bangkok that'd be easy to miss if it weren't for the line. There's always a line.

You can try to make a reservation, but the place — named after its chef/owner, a local legend — is usually booked a month or two out. Signing up for the walk-in list is the best bet for many, especially tourists. But you need to get there early.

"I got here at 7:30 [a.m.]," says 24-year old Kashmira Velji, from Austin, Texas, who was determined to try Jay Fai after viewing the chef's star turn on the recent Netflix special Street Food. Never mind that the restaurant doesn't open for lunch until 2 p.m.

"Everybody we've met on this trip, nobody we've talked to who's been here actually made it inside to eat," she says. "They told us that they'd gotten here at 9 or 10 [a.m.], that they'd been number 30 on the list and they couldn't wait that long to get food. So I was like, we're showing up [early] and we're getting a table." 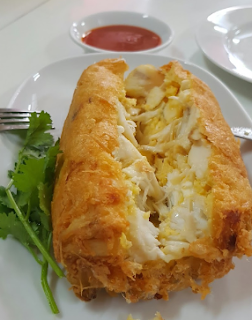 The CRAB OMELETTE
by Jay Fai

It worked. Getting there at 7:30 a.m. made Velji and her friend, Ana Wong, first on the walk-in list. Seven hours later, they were biting into Jay Fai's signature khai jeaw poo, or crab omelette.

"I've never had anything like this before," Velji says between bites. "I'm not making it up, I'm not exaggerating, it's actually amazing. Like, it's light and airy but it's also ... hardy," she says, somewhat puzzled. "Our first bites were very intense. We kind of just stayed silent and were in shock at how good it tastes."

Suparat Tretachayakorn — a doctor — isn't shocked at all. He's a regular. And the crab omelette is one of his go-to dishes.

"It's pure joy," he says. He's here with a few colleagues who've just polished off not one but two of the crab omelettes, each stuffed with roughly a pound of crab meat.

"It's so fresh, and it's a really big lump," he says. "And the way that she fried it, it's not very oily, it's not greasy at all. When you cut it open, it just oozes this creaminess inside and you go 'wow.' It's unbelievable."

He and his friends have also ordered Jay Fai's famous tom yum soup, and half a dozen other dishes. Tom yum is a Thai staple — made with shrimp, lemongrass, galangal, kaffir lime leaves, chilies, garlic and mushrooms — and it's found almost everywhere. But that doesn't mean it's always good. 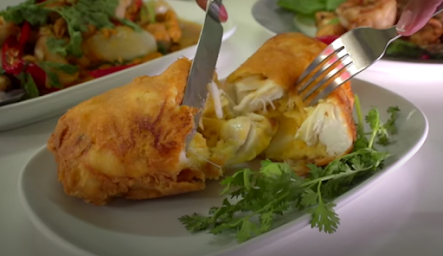 And Jay Fai appears to have defied logic with something she calls dry tom yum. It's another of her signature dishes. One that's got the visitor from Austin, Velji, baffled. In a good way.

"It tastes just like the soup, but it's dry," she says. "It's exactly the same flavors of the tom yum soup, but instead of slurping it, I'm chewing it and I'm still getting all those sour, spicy flavors," she says. I ask her how that's possible. She shakes her head. "She's magic, man. I don't know. She's got a special power. She's superhuman."

Her friend, Wong, — who had been skeptical a little earlier (remember the seven-hour wait?) — isn't anymore. The two have managed to finish a crab omelette, the dry tom yum and a plate of drunken noodles.

"There are no words to describe it. I mean, it's amazing," she says. "Just different flavors not overpowering one another — you can taste each one of them. "It's impressive. I give it a 10!"

"I give it a 15!" Velji interjects. She's not feeling at all foolish about getting here so early — which she had felt just a few hours ago.

"Now, I'm just looking at all these people lined up outside," Velji says. "We have the best seats. We have the best food. Everybody out there is staring at us, and we're in here enjoying the best meal we'll probably ever have," she says, motioning to the 30 or so people waiting outside in the blistering heat. "We're smart girls to show up that early. We're doers."

And part of the fun, they both say, is watching the maestro at work. The 74-year-old Jay Fai cooks everything herself — over two blazing charcoal fires, in the alley next to the busy street, while patrons snap pictures of her from a distance.

She wears a wool cap, a gray camouflage shirt with a long black apron and huge safety goggles to ward off the heat and fire. She is a dervish who barks orders to her underlings, who are quick to bring her whatever she asks. Ingredients for the next dish. Fresh woks to cook with. And more charcoal — always more charcoal — to keep the heat consistent.

"It's faster to cook when using charcoal, to stir-fry vegetables," Jay Fai says. "The charcoal makes everything very hot very quickly. Just don't put too much oil," she warns. "Put lots of chicken broth. The vegetables will be crispy and fresh and taste good."

And Jay Fai is a perfectionist — so much so that she doesn't let anyone else on her staff do the cooking. That's another reason why it takes so long to get your food here — even with reservations.

"They can't do it. This is very hard to do," she says. "It's not that I don't want them to do it, I do. But even when they watch me, they can't remember anything." And it's not just her staff she doubts. "The new generation, I can tell you, they can't do it to my level. I do things quickly and keep the quality good, too," she says.

Her real name is Supinya Jansuta, but everyone calls her Jay Fai. It roughly translates to "Sister Mole," a reference to a birthmark next to her nose. She says she learned to cook from her mom, who sold noodle soup with pork and chicken.

"To be a cook, you need skill. I didn't go to school, but I lived and cooked with my parents. When we went out to eat in a restaurant," she says, "I would watch them cook and taste the food, poke it around the plate and look at what ingredients they were using. Then I came back to experiment at home."

Eventually she started her own business, relentlessly sampling other people's food in order to adapt it, she says. To make it better — and to make it her own.

"I tried to cook every night after I closed the restaurant," she says. "I experimented until I got a dish right, to make a dish people wanted."

In the process, she decided to switch things up, forgoing the usual street food ingredients for the highest-quality ingredients possible — especially seafood. And she charged a lot more for it in the process.

Some told her it wouldn't work. She didn't listen. And her business grew. Fast. Enough for her to buy the shop house where she's been cooking for the past 40 years. She starts cooking as soon as the restaurant opens and doesn't stop until it closes well after midnight.

And about that Michelin star: When she got the first phone call, she kind of blew them off. By accident.

They called again. She politely declined again. The third time they called, she gave the phone to her daughter, who immediately understood why they were calling and told her mother she had to go. Which she did, though she had to be helped to the stage when her name was called. "I stood there dumbfounded," she says. "They asked me how I felt and I said, 'I'm in shock.' "

She's grumbled about it a bit since — about the crowds that have come with the fame. But she says she's happy.

"To be honest, it was the high point of my life. If I die now, if anything happens now, I'm OK with it. I'll die peacefully."

Jay Fai says her daughter wants her to quit cooking soon. She's not sure she can.

"This is my passion," she says. "And my art." The thought of seeing Jay Fai hang up her goggles and apron terrifies her Thai regulars like Suparat.

"The last time I talked to her, she said that she was admitted to the hospital and she was actually afraid she could not come back and work here anymore," he says. "I would say selfishly, I hope that she could go on and on. I don't know how many years," he says. "But I just hope as long as possible. This is something I cherish. I love street food. And this is the quintessential street food of Bangkok," he insists. "I can say 100% it is not hype. It's that good."

But it ain't cheap. A three-dish meal here can set you back about $75, in a country where you can get a decent meal on the street for less than $2. And there's been some sniping about it online. "This is something that upsets me quite a lot," Suparat says. "I can guarantee you most of them have never come here. If they had, they would not complain."

The two young women from Texas aren't complaining. "It was worth it 100%," Velji says. "This is probably going to be the cheapest Michelin star meal we'll ever have." Wong agrees completely. "In the United States, we pay $75 to go out on a Saturday night and it's not even memorable," she says.

"Totally worth it," Velji says of waiting seven hours to sit and eat. "That sounds embarrassing, but yes, it was." 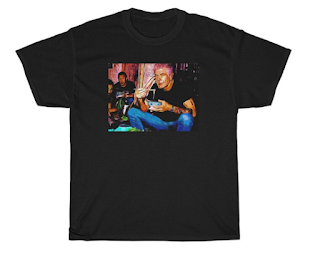