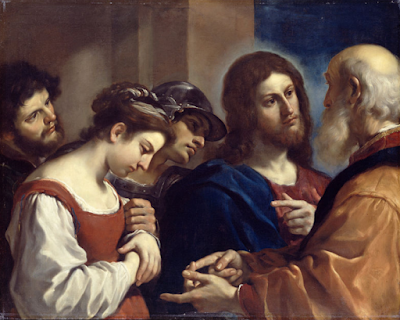 Giovanni Francesco Barbieri was born into a family of peasant farmers in Cento, a town in the Po Valley mid-way between Bologna and Ferrara. Being cross-eyed, at an early age he acquired the nickname by which he is universally known, Guercino (a diminutive of the Italian noun guercio, meaning 'squinter').[7] Mainly self-taught, at the age of 16, he worked as apprentice in the shop of Benedetto Gennari, a painter of the Bolognese School. An early commission was for the decoration with frescos (1615–1616 ) of Casa Pannini in Cento, where the naturalism of his landscapes already reveals considerable artistic independence.[10] In Bologna, he was winning the praise of Ludovico Carracci. He always acknowledged that his early style had been influenced by study of a Madonna painted by Ludovico Carracci for the Capuchin church in Cento, affectionately known as "La Carraccina".

His painting Et in Arcadia ego from around 1618–1622 contains the first known usage anywhere of the Latin motto, later taken up by Poussin and others, signifying that death lurks even in the most idyllic setting. The dramatic composition of this canvas (related to his Flaying of Marsyas by Apollo (1617–1618[13]) created for The Grand Duke of Tuscany, which shares the same pair of shepherds) is typical of Guercino's early works, which are often tumultuous in conception. He painted two large canvases, Samson Seized by Philistines (1619) and Elijah Fed by Ravens (1620), for Cardinal Serra, a Papal Legate to Ferrara. Painted at a time when it is unlikely that Guercino could have seen Caravaggio's work in Rome, these works nevertheless display a starkly naturalistic Caravaggesque style. 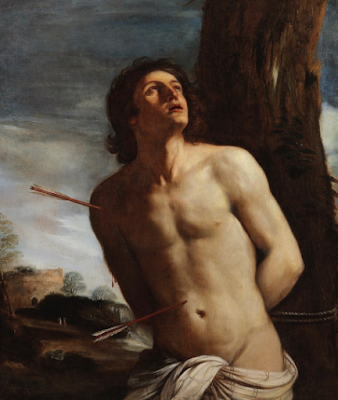 Discovered, identified as a Guercino, and purchased at auction by actor
Federico Castelluccio (Furio in The Sopranos) in 2015 ..