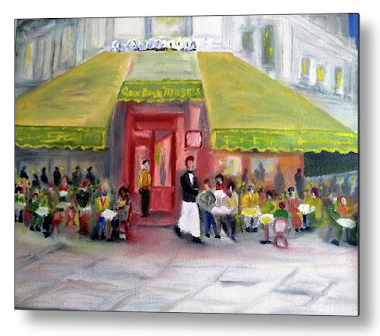 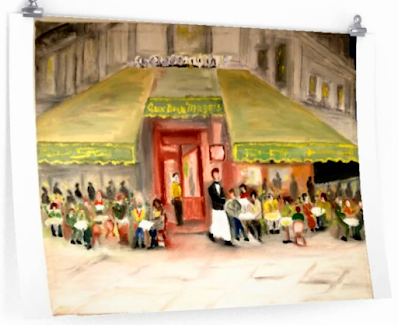 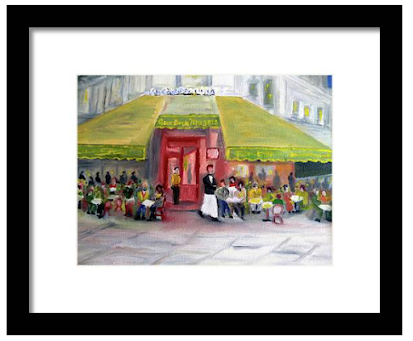 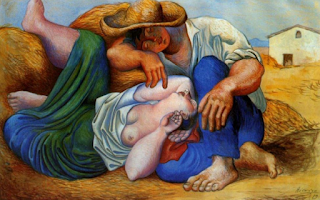 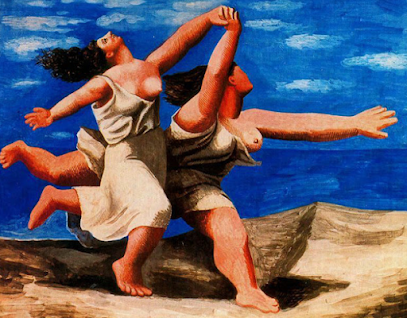 "The RACE'
Two Women Running on a Beach
PICASSO
1922
The rounded monumental figures of Picasso's  neo-Classical period of the early 1920s is known as Two Women Running on the Beach. This Neo-Classicism originally applies to the late eighteenth- and early nineteenth-century revival of Classical motifs, subjects and decorations, with the inspiration coming from the 1748 excavations of Pompeii and writings of the German archaeologist, Winckelmann. Picasso visited Pompeii and some Italian museums of Classical art in 1917, and their influence began to assert itself in this post-war series of colossal figures. A general reaction against the pre-war excesses and violent origins of Cubism and Expressionism saw a popular desire in art for the order, rationalized structure and humanity represented by this eighteenth-century movement.The vivid blues and the flowing hair here are anchored in the elongated brown limbs, contorted yet supple. There's a sense of fullness that makes you feel that this is how life must be lived - and war must be abandoned.It's a known fact that the women in Picasso's paintings are the women who inhabited his life at various times. His works are littered with references to artist model Amelie Lang, Eva Gouel, ballerina Olga Khokhlova, Marie-Thérèse Walter, surrealist photographer Dora Maar, art student Françoise Gilot, Genevieve Laporte and Jacqueline Roque. They gave of themselves to his art and his work is revealing of their personalities and the kind of relationship he had with each. 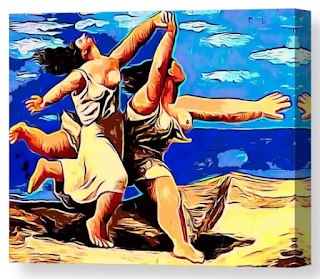 TWO WOMEN on The BEACH
After PICASSO
"IF YOU CAN'T AFFORD an ORIGINAL PICASSO" ???