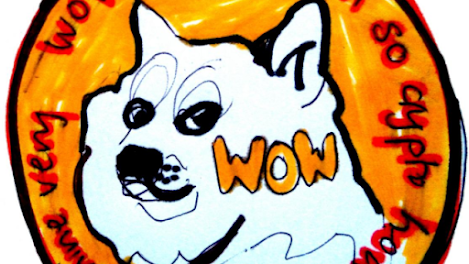 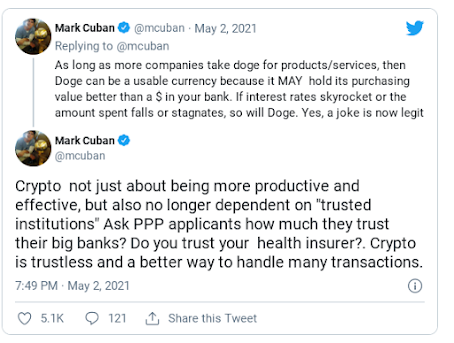 Mark Cuban Tweets on TWITTER that "Dogecoin is Legit."
Mark Cuban is a big advocate of Dogecoin and other cryptocurrencies, said on Twitter that the Dogecoin may hold its purchasing value better than a dollar in the bank on increasing adoption by companies.

“If interest rates skyrocket or the amount spent falls or stagnates, so will Doge. Yes, a joke is now legit,” Cuban tweeted.

The “Shark Tank” fame investor noted that Dogecoin’s annual inflation rate is set at five billion coins, which means for the cryptocurrency to continue gaining any significant value it needs to gain utility and users will need to use DOGE "for that utility."

Noting the utility of cryptocurrencies over traditional assets, the billionaire investor noted that Bitcoin (BTC) is easy to trade, store and create with no delivery issues, compared to gold, while it also enables the transfer of value locally as well as globally. Gold is a hassle, he added.

“One is automated and trustless and near immediate. The other is dependent on buildings full of people who add cost and friction to the same transaction,” the billionaire investor said.

Why It Matters: Cuban has supported Dogecoin while also acknowledging the cryptocurrency's joke origin. In March, the Dallas Mavericks began to accept Dogecoin as a means of payments for Mavs tickets and merchandise. Cuban revealed in April that Maverick’s sales in Dogecoin jumped up over 550% compared to the prior month.

Cuban believes that there is more likelihood of people using Dogecoin for making purchases compared to other cryptocurrencies like Bitcoin and Ethereum that have steep valuations.

Ethereum surpassed the psychologically crucial $3,000 mark late Sunday for the first time in its nearly six years of history. The cryptocurrency has risen 6.3% in the past 24 hours and is trading at 3,101.86. 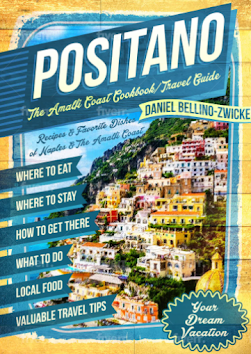 With The MONEY YOU MAKE on DOGECOIN ?
BITCOIN or WHATEVER ?
TAKE a TRIP to POSITANO
The AMALFI COAST
ITALY
AMAZON.com
at May 03, 2021