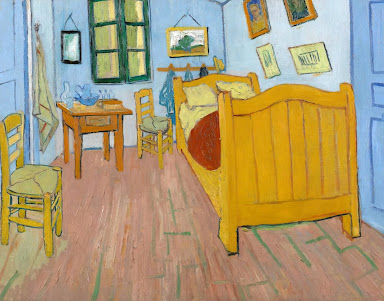 Van Gogh's own title for this composition was simply The Bedroom (French: La Chambre à coucher). There are three authentic versions described in his letters, easily distinguishable from one another by the pictures on the wall to the right.

The painting depicts van Gogh's bedroom at 2, Place Lamartine in Arles, Bouches-du-Rhône, France, known as the Yellow House. The door to the right opened on to the upper floor and the staircase; the door to the left was that of the guest room he held prepared for Gauguin; the window in the front wall looked on to Place Lamartine and its public gardens. This room was not rectangular but trapezoid with an obtuse angle in the left hand corner of the front wall and an acute angle at the right

Van Gogh started the first version during mid October 1888 while staying in Arles, and explained his aims and means to his brother Theo:

"This time it simply reproduces my bedroom; but colour must be abundant in this part, its simplification adding a rank of grandee to the style applied to the objects, getting to suggest a certain rest or dream. Well, I have thought that on watching the composition we stop thinking and imagining. I have painted the walls pale violet. The ground with checked material. The wooden bed and the chairs, yellow like fresh butter; the sheet and the pillows, lemon light green. The bedspread, scarlet coloured. The window, green. The washbasin, orangey; the tank, blue. The doors, lilac. And, that is all. There is not anything else in this room with closed shutters. The square pieces of furniture must express unswerving rest; also the portraits on the wall, the mirror, the bottle, and some costumes. The white colour has not been applied to the picture, so its frame will be white, aimed to get me even with the compulsory rest recommended for me. I have depicted no type of shade or shadow; I have only applied simple plain colours, like those in crêpes
2nd Version
In April 1889, van Gogh sent the initial version to his brother regretting that it had been damaged by the flood of the Rhône while he was interned at the Old Hospital in Arles. Theo proposed to have it relined and sent back to him in order to copy it. This "repetition" in original scale (Van Gogh's term was "répetition") was executed in September 1889. Both paintings were then sent back to Theo
3rd Version

In summer, 1889, Van Gogh finally decided to redo some of his "best" compositions in a smaller size (the term he used was réductions) for his mother and his sister Wil, The Bedroom was among the subjects he chose.[ These réductions, finished late in September 1889, are not exact copies.

In The Bedroom, the miniature portrait to the left recalls van Gogh's Peasant of Zundert self-portrait. The one to the right cannot be linked convincingly to any existing painting by van Gogh. 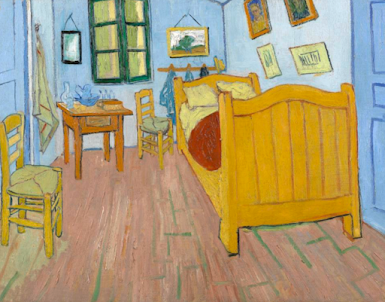 VINCENT VAN GOGH
"BEDROOM in ARLES"
Get Your Copy
.